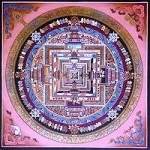 As mentioned on the Home page, mandala is a Sanskrit word meaning “circle” and they have been used in a variety of forms in many cultures for centuries. They are often used as spiritual teaching tools or focuses of meditation. Today they are also often tools for self-healing and personal development. To me they are also objects of beauty and grace. They are representations of the universe as well as representations of ourselves. To Carl Jung, “….the mandala is the centre. It is the exponent of all paths. It is the path to the centre, to individuation.”  (fromMandala Symbolism. C. G. Jung. (a collection of three works) translated by R. F. C. Hull, (Princeton University Press, NJ, 1973), p. v)

There have been many books written about mandalas and the symbolism inherent in their different forms. This is not meant to be an in-depth study of them, however, but a simple introduction. 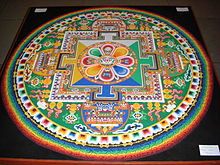 Often a mandala has a central focal point and is circular. Other geometric forms can be part of them. Often they’re surrounded by or contain a square, the four points representing the four directions for example or the four elements or other tetrads. Each element, their number, their color, their shape, etc. can have significance.

Tibetan sandpaintings, intricate designs created with colored sand, are mandalas.  After extremely detailed and painstaking work they are simply brushed away showing the ephemeralness of life. There is also a Mexican tradition of sandpainting. The Native American tradition of medicine wheels is a form of mandala. Buddhist Thangkas (Tibetan religious paintings) are often mandalas. These are just a few examples of cultural mandalas. 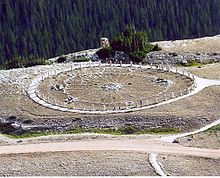 Examples of mandalas can be seen all around us: in a flower, in a doily, in a wheel, in the layers of an onion, in a spider web, in the zodiac, in a labyrinth, in a nautilus shell, in ancient stone circles; the list goes on and on. On a broader scale, the web of streets emanating from a plaza, or a network of rivers radiating from a body of water can be seen as mandalas.  Once you start looking, you’ll see mandalas everywhere!

My intention was to re-stock my supply of your mandala cards to send out to friends. But, I haven’t been able to part with any of them.  I keep the cards on my bookshelf beside my bed and frequently gaze at them before closing my eyes for the day.

Nancy’s work is AMAZING!  I am so impressed at the quality of her work and the intricate details.  Her recent series of the chakras is STUNNING!  The colors are pure and enticing, the selection of fabrics is well-considered and precise. Her designs are completely unique and each is extremely well thought out, and embellishments are just perfect. Not too much frou-frou, everything is in balance and so clear and peaceful. Just looking at them makes me feel like I’ve just had a nice meditation sess…

VERY COOL designs — the “green tara” on Sue’s piano is quite the conversation piece for her clients, and always an eyecatcher when you walk in the room….not to mention the love and healing energy that went into the creation. I love the notecards!

Just got the card–wow! The photos on line don’t do it justice. Beautiful! Thanks.

Your cards brighten my every work day.

Your work is beautiful!

Nancy, Seeing your beautiful mandalas inspires me each time. Congratulations on making them available to many, many more folks. The cards are wonderful, too, I am eager to share them.

THIS IS GREAT!!!!! Thank you for making these available to purchase-i’m sending them as cards as I know they hold a high vibration!!!

These are truly beautiful cards, dread parting with them, but I know they will be cherished by those who receive them… 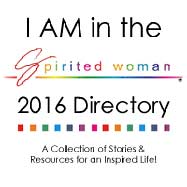 The Spirited Woman 2016 Directory is now available! I am so honored to be part of this group of remarkable women.

Be Inspired!
"There are two ways of spreading light – to be the candle or the mirror that reflects it."
-- Edith Wharton
"Fantasies are more than substitutes for unpleasant reality; they are also dress rehearsals, plans. All acts performed in the world begin in the imagination."
-- Barbara Grizzuti Harrison
"The only real failure in life is not to be true to the best one knows."
-- Buddha
"Love with your mind, think with your heart."
-- Sai Maa
"...that the supernatural is the natural not yet understood."
-- Elbert Hubbard
"You don’t get a choice about whether you create your life. You only get a choice about whether you create a life you love."
-- Mary Morrissey
"The happiness of your life depends upon the quality of your thoughts."
-- Marcus Aurelius
"Everybody is a genius. But if you judge a fish by its ability to climb a tree, it will live its whole life believing that it is stupid."
-- Albert Einstein
"To achieve the marvelous, it is precisely the unthinkable that must be thought."
-- Tom Robbins
"Rock bottom became the solid foundation on which I rebuilt my life."
-- J.K. Rowling
"And now, here is my secret, a very simple secret: It's only at the heart that one can see rightly. What is essential is invisible to the eye."
-- Antoine de Saint-Exupéry
"Whenever possible, practice kindness; and remember, it is always possible."
-- Dalai Lama
"Do the difficult things while they are easy and do the great things while they are small. A journey of a thousand miles must begin with a single step."
-- Lao Tzu
"You miss 100% of the shots you don't take."
-- Wayne Gretzky
"Every artist was first an amateur."
-- Ralph Waldo Emerson
"Peace is not something you wish for; it's something you make, something you do, something you are, something you give away."
-- Robert Fulghum
"Anyone who keeps the ability to see beauty never grows old."
-- Franz Kafka
"All the water in the world can't drown you unless it gets inside of you."
-- Eleanor Roosevelt
"Don't tell me the sky's the limit when there are footprints on the moon."
-- Michael Jordan
"Jump in boots and all, bite off more than you can chew, then chew like hell."
-- Natalie Ledwell
"Every great dream begins with a dreamer. Always remember, you have within you the strength, the patience, and the passion to reach for the stars to change the world."
-- Harriet Tubman
"Your imagination is your preview of life's coming attractions."
-- Albert Einstein
"Go confidently in the direction of your dreams. Live the life you have imagined."
-- Henry David Thoreau
"Where there is great love there are always miracles."
-- Willa Cather
"Gratitude is a quality similar to electricity: it must be produced and discharged and used up in order to exist at all."
-- William Faulkner
"Don't wait around for your life to happen to you. Find something that makes you happy and do it. Everything else is just background noise."
-- George Mason
Latest Work